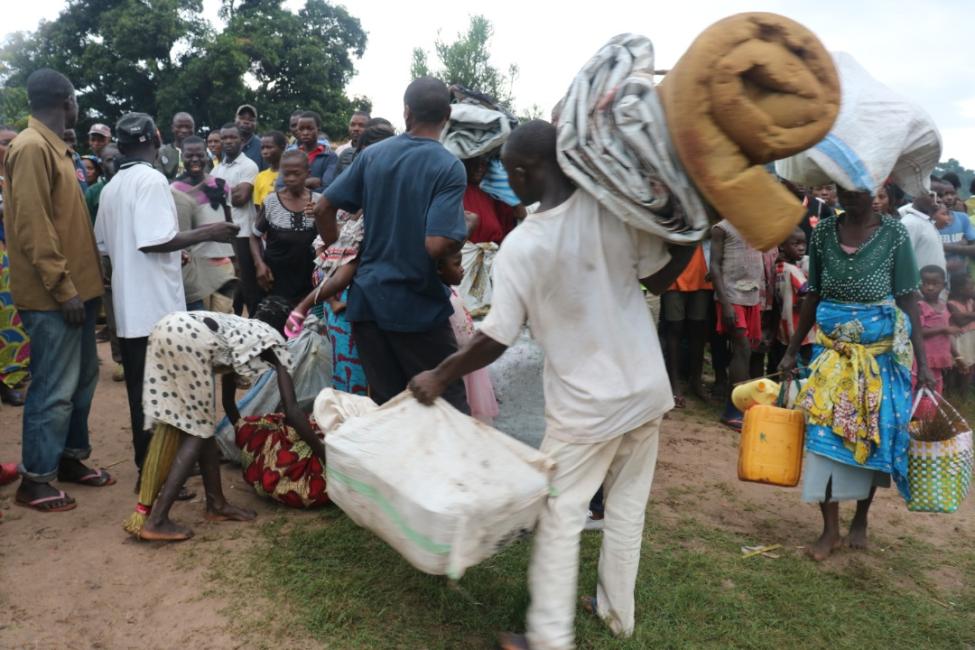 Photo: Internally displaced persons from displacement site Kankomba Office, about to return to their place of origin.

Kalemie – Last week the International Organization for Migration (IOM) in the Democratic Republic of the Congo (DRC) started assisting the voluntary return and relocation of displaced populations in Tanganyika province.

The Provincial Minister of Humanitarian Action of Tanganyika officially launched the operation last Thursday (12/03). Those assisted included one group of 974 families residing in the Kankomba Office Displacement Site.

Over the next three months, IOM expects to assist a total of 1,133 displaced families in Tanganyika province to either return to their communities of origin or relocate.

According to the Population Movement Commission (CMP), Tanganyika Province currently has around 350,000 displaced individuals dispersed in displacement sites and host families across the province.  IOM continues to assist displaced population who are not yet ready to return or relocate with Camp Coordination and Camp Management (CCCM), displacement tracking, shelter and Water, Sanitation, and Hygiene (WASH) activities.

A comprehensive survey carried out by IOM’s Displacement Tracking (DTM) during 2019 revealed that a majority of some 5,362 families in three displacement sites in Tanganyika expressed their intention to return to their area of origin or relocate in another location or community of their choice.

In Tanganyika Province, there are still many individuals who continue to be displaced and have not found durable solutions due to persisting insecurity in their area of origin.

The province has recorded waves of population movements since 2016 following conflict, occurring in the territories of Kalemie, Kabalo, Moba, Manono and Nyunzu, towards the outskirts of the city of Kalemie.

Around 80 per cent of the IDPs registered in the three sites come from the Kalemie and Nyunzu territories. These two territories of Tanganyika have been the most affected since 2016, due to insecurity and inter-communal conflicts between the Twa and the Bantu ethnic groups, as well as armed groups operating north of Kalemie territory.

According to the CMP, and as reported by the United Nations Office for the Coordination of Humanitarian Affairs, Tanganyika registered 350,000 displaced people as of last December.

During the official launch of the voluntary return operation, Natacha Mulange Mpundu, the Provincial Minister for Humanitarian Action said: “We praise the actions of humanitarian organizations in Tanganyika. We thank IOM, which has been instrumental in the success of this operation. We are confident that this operation will take place in peace and that each displaced person will be able to return to their home in peace."

To support the returnees, IOM provides assistance such as transitional shelter, funds, and transportation to the area of voluntary return.

To further facilitate reintegration between returnees and the host community, IOM plans to begin small community-based initiatives such as construction of water point benefitting both communities.

Funds for these operations have been provided by the governments of Sweden and the United States (OFDA/USAID).